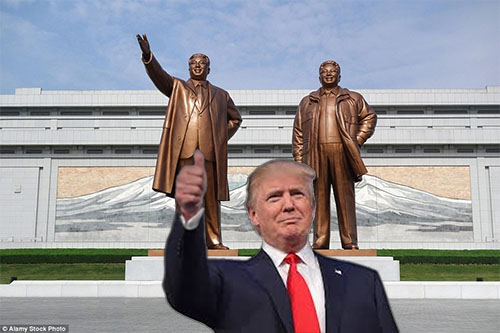 With their recent history of threatening America with nuclear warfare and a long devoted history to standing against democracy and human rights, North Korea’s Kim Il-Sung, Kim Jong-Il and Kim Jong-Un have solidified themselves as an important part of American history and deserve to have statues in Washington, D.C.

Many Americans have taken to the street to take down statues of men who were once enemy combatants and stood in defiance to America, celebrating the assassination of Abraham Lincoln, wanting to own other slaves and supporting a regime that commissioned the bombing for Pearl Harbor and planned an invasion of America’s Pacific seacoast.

President Trump made it clear that its anti-history and anti-America to not build monuments to celebrate those who took up arms to destroy America, so it stands to reason that other enemies of America are just as important — if not more — and surely deserve some recognition and monuments in Washington, DC.

America will not truly embrace freedom and democracy until statues are built in honor of other great figures in American history, especially Kim Jong Un, Osama bin Laden, and the Faceless Statue of the Homegrown Terrorist.

Trump: “Are We Going To Take Down Statues to George Washington? How About Thomas Jefferson?”