President George W Bush Confirms Obama is Conspiring with Iran, Losing to ISIS, Not Keeping the Russian In Their Place

President George W Bush Confirms Obama is Conspiring with Iran, Losing to ISIS, Not Keeping the Russian In Their Place 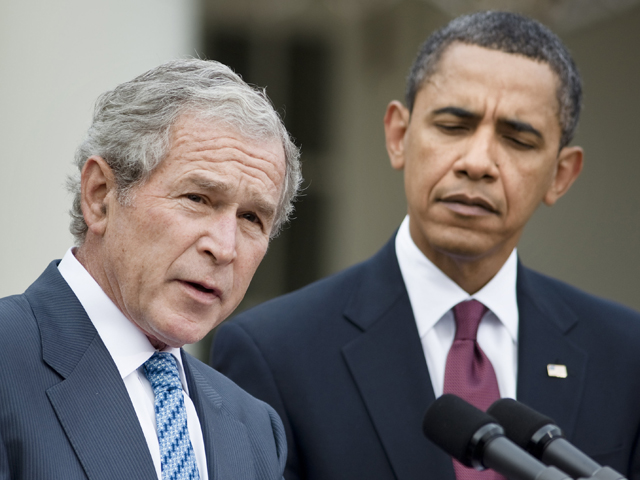 The greatest president in US history since the year 2000, President George W. Bush, has finally spoken out against Barack Hussein Obama.

For years the news media and the public have cried and loudly yelled the obvious about Obama:  he is naive, too friendly to Axis of Evil nations and is now even losing the war to ISIS.  But not all of America will agree to the assertions, oft citing that no one other than the president could truly understand the nuances of US foreign policy and how to deal with the Middle East.

Thankfully, President Bush is putting an end to any debate or argument.  President Bush is the reason why Saddam Hussein has fallen, why Qadaffi is no more and why oil flows freely from the sandy deserts of the Middle East and into the coffers of great American enterprise such as Halliburton.

The Iraqi people call George W. Bush the great liberator, but now Obama is allowing ISIS to reconquer the lands once ruled by Saddam Hussein.  Here’s what America’s greatest president of all time says about fixing Iran and terrorists:

“In order to be an effective president … when you say something you have to mean it,” Bush said. “You gotta kill em.”

All of America’s enemies already knew this philosophical way of thinking by Bush.  They knew that if they did not agree with Bush, he would lead an invasion and put them in their place six feet under.

Against Red Communism:  Here we see Vladimir Putin underdoing the flight or fight response as President Bush ‘hulks up’ and stares him down with nuclear confidence backed by the world’s most powerful economy.  Putin kept his mouth shut, did not invade Ukraine and recognize Bush as his superior.  Could you imagine how Putin would laugh if Obama tried to do this?

The sons of Xerxes all look on and laugh with uncomfortable grimaces after President Bush grabs a sword.  The smiles on their faces are the same fearful, forced smiles seen on the populace when Kim Jong Un visits a town.  They know the Great Leader is before them and one false move will force him to rain Armageddon upon their lives.    “Give your oil to America or you’re done,” Bush quipped as a photographer took this photo.

Keeping allies in their place

America’s first president, General George Washington, did not hesitate to put on his military uniform and bath himself in the icy waters of the Delaware River if that’s what it took to defeat an enemy.   President Bush routinely flew over to Britain in combat uniforms, just a reminder to them that he would not hesitate to fly a B-52 right over Buckingham Palace and start dropping bombs if they failed to back the US lead invasion of Iraq and any other nation.