Chimps Caught Using Spears to Hunt, Are They Evolving Too Far?

Chimps Caught Using Spears to Hunt, Are They Evolving Too Far? 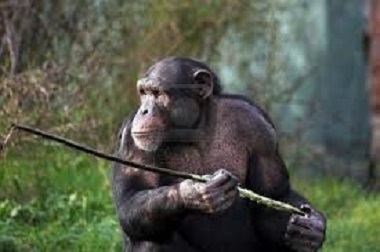 A disturbing development in science reveals that chimpanzees are evolving the ability to hunt with spears.

Primatologists have followed and studied a band of chimp warriors in Senegal since 2007.  In only eight years, the researchers gathered extensive footage that shows the chimps can forge and cache weapons that are used to ‘hunt down and bring injury to other animals’.

Even more shocking, within this chimp culture females are the dominant masters of weapons, oft entering the field of battle with a primal rage and the strength of over three men of impressive physicality.

What Does Chimp Evolution Mean for Humans and Christianity?

Evolution has been a hotbed topic within the scientific and Christian debate community.  Some scientists claim that humanity ‘evolved’ from primates such as chimpanzees, yet they cannot provide any proof of this whatsoever.  This has caused a major rift and much contention between colleagues within science.

Yet before us, we can see chimpanzees are openly showing mastery of weapons on par with what some humans still use to hunt and gather food.  Through some means, be it Illuminati scientific experimentation, Satanic possession or perhaps evolution is actually real, chimpanzees are developing complex hunting strategy, weapons and even classic military flank maneuvers.

Sir David Anthony first brought light to the fact that chimps were developing ‘highly complex’ hunting strategies.  Be warned, the chimps in this video organize and brutally demolish a family of small monkeys.   The footage of the chimps throwing their head back and savoring the battle with the monkeys, much like a group of blood-lusted Huns raiding a small town, is quite shocking.

But now we see chimps are evolving the ability to fish with spears.  In Senegal, they are scaring up game and hunting it down with spears.

Several days ago, a silverback gorilla glowered with frustration after a beautiful nuclear family simply stood and observed him with out a zoo.  In a moment of rage, the gorilla lashed out with all its might and attempted to break the glass so it could smash a family.

The gorilla’s anger and fury hinted of a mighty gladiator caged up, just waiting for the right moment to let everyone know of the power he truly contains.

In nature, gorillas have an uncomfortable alliance with chimpanzees.  If push comes to shove, make no mistake these animals will make an alliance to finally taken out the annoying Homo sapiens who have long been their captors and thumbed noses at their inability to ‘evolve’ complex thinking and strategy.  Chimps have been known to groom other animals, slowly gaining their loyalty and turning them against humans.

There is also one other bit of shocking footage.  In Africa, a young chimp came upon a group of soldiers.  The soldiers laughed and believed the little primate was cute, but then they were in for a rude awakening.

Just imagine if that chimp was recruited to fight against Christian missionaries.  These animals are ruthless, stronger than humans and can blend into non-urban warfare quite well.  They are masters of trees and high-rises, they can hunt well in packs and are loyal to their alpha-male.  Having chimps are this level of mastery is just too dangerous and America has a moral responsibility to ask if chimpanzees, as a society, have a right to wield and use weapons.

The answer must be no.  We must criminalize the usage of any weapons by chimpanzees.  Sure, they may pick up an AK-47 today and maybe chuck a few spears at game tomorrow, but how long before they are assembled into neat assault groups, ransacking churches full of Americans at the behest of some dark, liberal leader?

These are important questions to ask, questions we definitely have pondered before.  These chimpanzees are becoming too smart for their own good and we must start to throw them into animal sanctuaries, zoos or even Siberian gulags if it ensures the survival of the human race.

Remember, if evolution is true the game is called survival of the fittest.  If the chimp was in your shoes, it would hunt you down and eat you.  Humanity, we better stop these primates before they arise and wipe us out, and usher in a new age of simian rule on planet Earth.