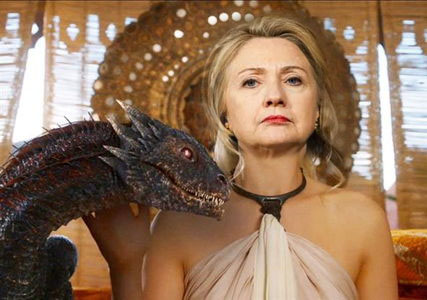 A great and powerful shadow looms over the United States in these days of peril! The age old myth of the Hillary Clinton campaign has come to light and she is now going to run for president as the first woman to do so. The runners up alongside her competing for this arbitrary light are going to be no match for her Liberal darkness powers!

Our long time, unanimously nominated conservative hero, Mr. Chuck Norris had this to say about the Dragon Mother running to acquire the presidential light,”Not only would her presidency be “Obama, the Sequel,” but she would be an unbridled, more powerful, mega-wealthy, powder-keg Obama personality.”

Apparently, he had more to say about her liberal and unethical ways and plans for if and when she gets into office. The shadowy doom that lurks around this presidential race will consume voters and nonvoters alike whether they want it to or not! She must be stopped before she sentences her fellow dragons upon our young and slays our gallant fighters for the bright and pure light of office!