Outbreak of Homosexuality At Coachella, 100s of Men Feared Infected

Outbreak of Homosexuality At Coachella, 100s of Men Feared Infected 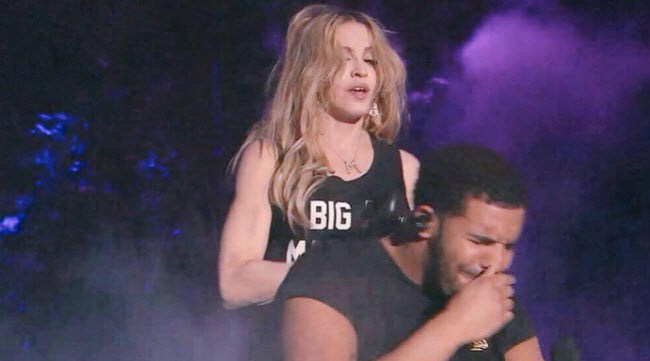 Acute onset homosexuality causes a street rapper who goes by the stage-name Drake to openly wrtetch after buxom blonde Madonna seductively kisses him on stage.

Homosexuality is running rampant at Coachella. The music festival usually attracts an assorted menagerie of drifters, young liberals and Boomer Baby socialists, people who are all too happy to gorge themselves with intense doses of lurid drugs and spread their loins for sensual pleasure as random assortments of heartless music fills the air around them.

Oh yes, Coachella is a devil’s den of debauchery but the shocking amount of homosexuality on display at 2015s camps has caught the attention of pastors and CDC officials alike.  Mixed reports from sources attending the event claim that men dressed in traditional fraternity logos are making out with men and women alike.  Rough estimates place over 1,000 separate accounts of homosexuality from men who look like they should be straight.

The most blatant display at the festival took place on stage when the rap artist Drake took the stage with the belladonna of sensuality, Madonna.  Madonna fulfilled every rapper’s fantasy as she unleashed her blond-haired embraces all over Drake, yet, we see Drake did not respond by getting her pregnant.  He was instead disgusted.

Source indicate that a ‘purple haze, closely resembling chemtrails’ surrounded Drake on stage.  Video footage clearly shows Drake being overcome by the purple haze.  Moments later, Madonna came out and tried to arouse Drake and partake in typical Coachella debauchery.  Drake instead wretched and appeared openly disgusted.  This shows that within moment this new cold fission version of chemtrails does not even require a bomb or plane to be released, it can be released on stages and stage performers can immediately lose control of repressing homosexual behavior.

Drake is only one of many different celebrity band victims at this year’s Coachella fest.