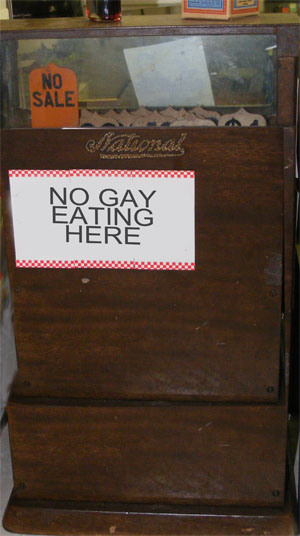 Indianapolis, Indiana – An outbreak of homosexuality in a suburb of Indianapolis forced state legislators and the governor to discretely meet and push through a holy law to protect straight men from catching homosexuality.

The backstory starts three days ago, when a local outbreak of homosexuality was traced to The Christian Kettle Restaurant.  An overtly gay couple from New England had eaten in the restaurant and the owner noted they were very gay:  a pronounced gay accent, very wealthy and well dressed for just a Thursday outing, slightly aloof and high-brow in dry humor and decidedly enamored with one another, even though they were both males.

Restaurant owner Joe Bird was powerless as the boisterous couple “loudly spoke of political issues at the table, praising Obama and slighting Midwest values in between bites of our ‘local Bible belt fair food’ as they described it.”

Many families were eating at the restaurant that day and some chose to leave, as the couple was making them very uncomfortable.  Cold stares from the local town folk was not enough to ‘chase’ the couple away and one resident, who reports under the condition of anonymity, refused to have his sons witness the couple kissing each other.

“Once those two men started necking with each other at the table, the Holy Spirit told me that I had to make a stand.  I needed to show my sons that we had to confront sin and not just let it live in front of us.”

The father went up to the couple and told them that while he had nothing against gay people, they needed to go ahead and leave the restaurant.  It was a family place where people with Christian values could go and dine.

At this point, one of the gay men allegedly coughed a ‘phlegm-oriented cough’ in the father’s face, a few spittles landing on his nose.  The boy’s father reports that he was shocked but chose to ‘turn the other cheek’.

The gay man who coughed then stated, “Oh, you better be careful hun, because now I have just infected you with homosexuality.”

The gay couple laughed and continued eating their food, continuing their romance and conversation for everyone else in the restaurant to see.

Restaurant owner Bird called the local sheriff to explain the situation and asked if there was anything he could do:  the couple was disrupting his business and had possibly infected one of his customers with some unknown illness.  The sheriff said it was impossible to arrest them on those issues, but he would speak to the Mayor.   Little did they know that a major pandemic was brewing.

After about a half-hour, the gay couple requested their server bring their check.  Their waitress, Amy Grant, said the men ‘Were very polite and chatty.  I work the restaurant to help pay for college.  Their meal came to about $48 and they laid out two crisp $100.00 bills on the table.  They told me to ‘keep the change’ and wished me well in my studies’

About 15 minutes after the gay couple left the restaurant, the father of the two boys who confronted the gay couple reports he started to ‘feel feverish and groggy’.  His sons panicked when he passed out, his heart tachycardic and his body diaphoretic.

Other men in the restaurant started to slump over in their chairs and expressed similar symptoms:  coughing, tight chest, sweating fever and grogginess.   The restaurant owner called the local ambulance service and hospital, who rushed in and assumed that perhaps a bout of food poisoning had set upon the men, exacerbating other medical conditions.

But hospital analysis revealed no foul digestive pathogens.  Instead, medical doctors soon found themselves consulting with psychologists.  Every single man who had fallen ill that evening reported, when awakening from their grogginess, “I feel attracted to men.”

While the confusing medical situation took place at the hospital, in the town the pandemic started.  Police received multiple phone calls of men ‘furiously holding each other, kissing deeply and rubbing upon each other’s sensual regions.’

A local pastor reports a man ran into the church confession box, telling how he had just made out and copulated with a man in the street, in front of his family.   He went into lurid details, coughing and crying at the same time.  The priest reports that about twenty minutes into the confession, he too ‘had a black out moment and when I came too, I was passionately kissing this man.  I don’t know what came over me.”

Dr. Rhandi Dumphthala of KH University at Oxford reports this quick, rapid type of outbreak has been seen before by the CDC.  While it does not have a public name yet, many experts are referring to it as ‘Homosexual Outbreak Syndrome’.

“In recent memory, you may remember seeing typically conservative, Christian men on your television, confessing that they cheated on their wives and just could not resist doing a homosexual act.  Well, these men are probably excused because they were infected with a pathogen that altered their DNA in such a way that it makes them a hyrbid heterosexual and homosexual.  They cannot resist their genes and that is fine, but heterosexual men need be aware.  They can become gay at any point in their life.  But now, it seems we have a medical reason for it.”

The town’s mayor quickly reported the outbreak and the CDC responded to discretely isolate straight males who were reportedly exhibiting sudden homosexual urges and actions.  Indiana Governor Mike Pence took quick, decisive action to ensure restaurants did ‘not feel obligated’ to put their customers at risk of catching homosexuality by signing the Religious Freedom Act into action.

While it is not illegal to expose your customers to homosexuality, business owners should be given the choice if doing so.  If a business does protect its customers, they have a right to display a sign as seen on The Christian Kettle’s cash register above to warn gay people that the restaurant does not want to take the risk.

Homosexual rights activists say these laws are no better than Jim Crowe segregation laws the South once employed against black people and Civil Rights attorneys agree.  A battle will remain for Indiana and Kansas, who has enacted similar laws, as prominent gay people are taking a strong stand against these new Religious Freedom type acts.