Should Obama Be Charged with War Crimes for his Savage War Against Christianity?

Should Obama Be Charged with War Crimes for his Savage War Against Christianity? 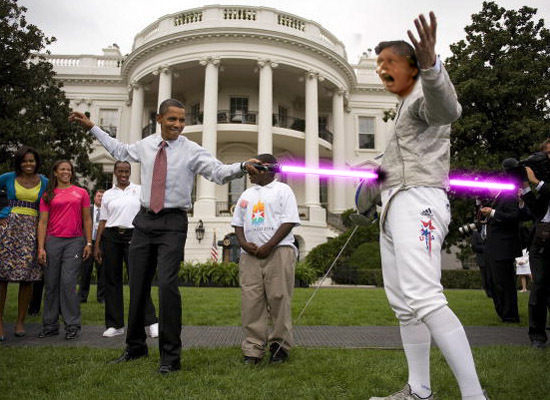 Obama’s war against Jesus and Christians rages on.    2015 was highlighted by the picture at left, where Obama openly stabbed a Christian movie producer with a lightsaber for promoting the hit film Saving Christmas.

While White House staffers said they actually created the image in jest on their Apple computers, those close to the victim, Matt Afferty, claim the producer has never been seen or heard from again.  A quick review on the US Census reveals all record from Afferty were erased from existence.

The account above is only the tip of the iceberg of how Obama has tried in every way possible to annihilate Jesus and Christianity, so that he may one day reign in an unprecedented age of sin and carnality.

Fox News anchor Sean Hannity delivered a prophetic message in 2012, when he predicted Obama’s Middle Eastern policies of ‘toppling’ regimes such as that of Qaddafi were part of a larger scheme to perform Christian Cleansing, that is, the systemic eradication of international Christians.

Since then we see Obama strategically pulled America’s forces out of volatile, fragile regions where President George W. Bush fought to bring Christianity to terrorists.  In Iraq, millions were rescued from Saddam and set upon a path of Christian capitalism, oil futures and American partnership.  The Bush Doctrine worked as it brought prosperity and Christianity to the former terror people of Iraq, but Obama did not want Iraq to fully convert to a Christian nation.

So he withdrew our troops, ‘brining them home’ to the applause of the liberal media.  But now what has happened in Iraq?  ISIS has taken power and Christians are being beheaded.  Obama knew this would happen and this is only the tip of the iceberg of Obama’s war crimes against Jesus.