Fifty Shades of Grey is a hit Christian novel and movie about a wonderful man grooming his future wife in a fundamental skill, “Being Domestic Stay-at-home Mother”.

Fifty Shades of Grey is a superb Christian-romance novel series by American writer Etta L. James.  The book quickly developed a cult-like following, because it shows what it is like for a woman to date and marry a sterling Christian man with Republican values.  Women worldwide have come to realize the lifestyle, the thrills and excitement, that comes with marrying a man with a lofty moral compass, compassion for his woman and life and the capitalist blessings that God gives those of us who walk in his light.

This weekend the movie has already surpassed the Passion of Christ, another great movie about a moral man giving all for those he loves.

James first came up with the book’s concept after reading Stephanie Meyer’s Twilight series.  “What if these characters were realistic and Edward was a wealthy Christian,” she mused to herself.  Starting off with just a bit of penned fan fiction for the net, James realized she had written her biggest hit yet by the instant cult following her writings received.

It was not before long that we got the first novel, then the latter two, that we will explore here and understand why the Fifty Shades of Grey movie, just like most true Republican men, is irresistible to women. 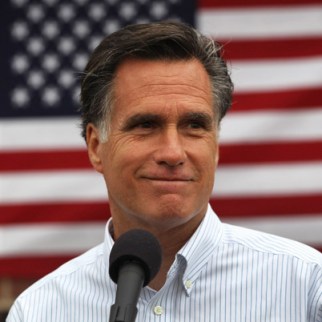 [adinserter name=”bigsky”]Fifty Shades of Grey starts out in Seattle, where a college-literature student named Anastasia gets to interview a handsome, well-built 27-year-old billionaire venture capitalist named Christian Grey.  When you read about Christian Grey, you immediately think about a young Mitt Romney.  Confident, Republican, dominant and commanding the submissive:  these are all admirable Christian qualities that make women melt, as we find in this hit movie that’s grossed $81.7 million in its opening weekend.

Christian Grey is an avatar for a young Mitt Romney in this flick.  James’ pick of the name ‘Christian Grey’ and use of Mitt Romney for his inspiration is perfect.   Mitt Romney has Christian values, he is youthful but has those wise ‘greying’ temples, which sends women stamping their hind legs like a cat in heat.

Stephanie Meyers is Mormon, so it makes sense that the source man for the book and movie follows that faith.  But the plot quickly transcends into the world of Christianity in James’ bent, when it explores the fundamental concept of Republican virtues and values:  wealth, strong sensuality for the eventual/wife and overcoming internal demons.  Hence the name Christian Grey.

Christian Grey is a flawed man.  A Jezebel named Mrs. Robinson beguiled him when he was only 15-year-old.  At an age where he just wanted to focus on his studies and faith, an old cougar preyed on him and ruined his mind a bit.  Christian overcame his internal hurt by focusing on business and becoming successful, just like everyone else in his family.  But Christian still had that hole in his soul, put there by Mrs. Robinson.  How many young men have had to suffer just that same fate, at the hands of some toned-up vixen on the prowl?

Christian instantly realizes Anastasia is going to be his wife, but is worried that she is only 21-years-old.  Therefore he creates some clear lines for her, and this is where everything gets quite juicy and salacious.  Christian Grey sets out an agenda, explaining to Ana that there will be no romance, just a strict values-driven relationship.   He will be the dominant man and she the submissive wife.

It takes a while for Anastasia to come to terms with this dynamic, but she slowly explores it and realizes the child-inducing sensations from following Biblical edict and submitting to Christian’s authority.  And it is the allure of this dynamic that makes Fifty Shades of Grey have a 94% approval rating among women.  There is a lie that Satan has spread in our world:  Christian men are boring at home, especially when kicking the sheets.  James proves the truth of the matter is definitely opposite.

There is no reason for her to go out and work, since he is rich.  Christian just wants her to not do damaging things, like going out to get drunk with her old college-friends, not being seduced by ‘just a friends’ like Jose Rodriguez, not being seduced by crazed-bosses like Jack the Ripper at SIP and not being jealous of his ex-girlfriends.  Through a lot of grit and near-misses, Ana eventually comes to realize being a BDSM Christian wife — cooking, raising a family, cleaning, staying chaste, being passionate and not cheating — is not that bad and gives Christian two beautiful children and they live out life in their mansion happily ever after.

Energy, food, and water is not a human right, it should be privatized. Until we realize that fact, scarcity will produce countless wars that while profitable, shall continue to plague humanity.