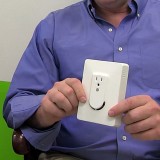 Vice has brought great news to the world today.  The device above is part of a wonderful technological achievement constructed by a Darthmouth professor.

In a nutshell, the smoke detector can parse between various types of smoke, most importantly the smoke produced when a drug users lights up a marijuana cigarette.

Marijuana is not a gateway drug, it is a destination drug.  It is very dangerous and can ruin a user’s heart, mind and soul.  The device above is clever and even gives parents, employees, spouses and business owners the ability to ‘sneak it’ into a room, as it has a portable form.  I imagine one day the device can be developed to silently communicate with an iPhone or perhaps even the Drug Enforcement Agency (DEA), so that way when students are trying to sneak and smoke in the lockerroom or behind the bleachers, or worst when your spouse is having a little ‘ganja time’ with the co-workers and then having all sorts of illicit, sultry affairs that they forget about when the marijuana loses hold of their mind.