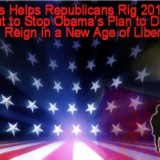 By becoming majority leaders, the Congress is now in a position to destroy Obama’s policies in the next two years.  And in 2016, America will be in a place where voters can elect a Republican president to work with a Republican Congress, to restore America to a greater glory than seen in the years of Ronald Reagan.

Immediately, we shall see all of Obama’s sinister machinations, from trying to overtax our corporations, to providing healthcare for the lazy poor, to helping ISIS gain weapons with which they will try to destroy Christianity as they did in the days of Xerxes and most recently, the ‘gay marriage loophole’ gays are using to destroy the notion of a traditional nuclear family in these great lands.

All of the things above were an affront to Jesus.  Whenever America lets its morals slip and let the Democrats create another slice of Sodom and Gomorrah, it destroys Jesus.  No, Obama cannot physically take Jesus in a fight, but since mankind has free will, Obama can destroy Jesus by helping Satan win the hearts of the mortal and then damn their eternal souls to a sad, horrible fate.

My dear friends, the polls all showed that Republicans should have lost, but divine intervention took place.  Jesus reached down from heaven and…helped…the machines vote like they were supposed to vote.  Even when a person may have voted perhaps for Greg Orman or Paul Davis in Kansas, Jesus knew deep in their heart and soul they wanted to vote for Pat Roberts and Sam Brownback.  Instead of sitting back and just letting the poison commercials ran by Democrats trick these misguided voters, instead Jesus just helped rig the machines a little to vote the right way.

Remember, mankind does not understand the divine, so this was not cheating.  It was simply Christ using a medium to help things turn our how they need to be to ensure the future of humanity, morality, Christianity and therefore, America.