ISIS Celebrates US Election Results, Looks Forward to ‘Republican Congress Getting Duped into Expensive Wars with Us’

ISIS Celebrates US Election Results, Looks Forward to ‘Republican Congress Getting Duped into Expensive Wars with Us’ 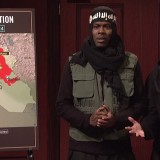 ISIS released an official ‘thank you’ to American voters early Wednesday morning.  For several weeks, ISIS leaders purportedly fretted as it looked Americans were determined to vote for Democrats in the 2014 elections.

“I have to admit, we were sweating bullets,” an anonymous ISIS spokesperson said on Twitter.  “I mean, for a second there we all thought the American people had come to their senses and realized Republicans are key to our plan to destroy Western civilization.

Scholars believe the reference is to when in 2001, George W. Bush famously declared a war on terror, chiefly focused on direct military intervention in the nations of Iraq and Afghanistan.  The US quickly took to the ground and has since spent trillions of dollars on warfare, catapulting the economy into a tailspin.

A communique between terror leaders seems to confirm the thought:

“These stupid Americans, they do not realize we are not dumb.  They do not understand we know we cannot win a war against their military, but we can win a war that destroys their economy.  How much does it cost them to build a drone and drop one missile on us?   $50 million?  How much have they spent on Iraq and Afghanistan, to only have it fall into our hands?  Trillions?