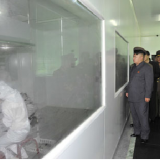 Pyongyang, North Korea–  As the world continues to speculate on the whereabouts of North Korean dictator Kim Jong Un, the secretive nation-state released a video on which they claim their top scientists have found a cure for Ebola.