Gangs Now Using Light Sabers to Kill Each Other

Gangs Now Using Light Sabers to Kill Each Other 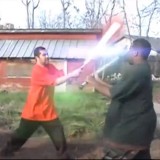 In the video above, we can see gangs are now using experimental weaponry to kill each other.

Shocking new video footage shows a typical gang junkyard fight quickly takes a turn for the worse, where one of the gang members pulls out experimental military weaponry and uses it to attack his foe.

Shockingly, none of the other gang members pulled out their guns or seemed surprised.  The viral combatant actually pulled out his beam sword and proceeded with great mastery of the weapon.

This is quite troubling because if you look at the statistics, Chicago’s mean streets are already rife with gun violence.   Too many people are shooting and killing each other.  It is just quite sad and more proof that better weapons profiling is needed in America.

The video above supports my position that a few profiling rules need apply before people can get their hands on weapons like this:

1)  People who live in urban, inner-city areas should have to submit an application to the NRA before buying a gun.  On the application they will fill out the following fields:

e) Do you know your mother/father?

e)  Attach a non-photoshop picture of yourself

Those five questions all by themselves will let any NRA judge be able to tell if the person should be allowed a second-Amendment rights.  If they are voted no, they should always be arrested and charged with treason if they are ever caught owning a gun.  If a person has a gun and has never submitted a NRA application, they are automatically guilty and charged with treason.  Problem solved with all the gun violence instantly.

I think the NRA should get jurisdiction over this new laser weapon because when you look at it, it’s really just a fancy bayonet.