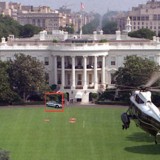 The officer allegedly told Secret Service members, “I got a call that a black man was in the White House, so I had to come and investigate.  Sounded like a break in to me.”

Secret Service officials allegedly explained to the officer that Mitt Romney lost the last election and it is true that a black man was actually voted into office.

Sources close to the case expect the name of the officer to be withheld until the end of the investigation.