Does Obama Belong Behind Bars for Letting ISIS Get So Powerful?

Does Obama Belong Behind Bars for Letting ISIS Get So Powerful? 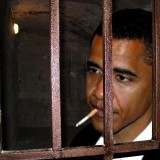 Barack Obama is too soft on Islamic State terrorism.  As soon as Obama took office, he tried to make peace with the Axis of Evil nation Iran.  The Iranians have made it quite clear that they are jealous of America’s freedom and do not want peace, but to only terrorize us until we are all reduced to cowering in our homes in fear.

But that in itself is not grounds enough for impeachment, let alone throwing a sitting US president in prison as statistics say based on his heritage, he should definitely be in county lock-up if not being interrogated by Dick Cheney and friends at Gitmo right now.

Here is the big reveal, my friends.  Brace yourselves.  The Democrats have known about ISIS since the Clinton Administration.

Do you remember this?  At the time, Bill Clinton was caught cheating on his wife Hillary Clinton.  As America’s Christians questioned him on why he would betray us like this, during his defense he mockingly asked, “What is, is?”

We thought he was playing word semantics, but in actuality, Bill Clinton was secretly communicating with his terrorist allies in the Middle East.  What is, is?

“is, is” was Clinton’s way of publicly calling on the help of ISIS.  It is well documented that Arab leaders high-fived Clinton for getting rimmers from Lewinsky, they loved his soft policies on Saddam.  With Democrats in office, terrorists have it made.

When the American public voted to impeach Clinton, he sent on this secret message to ISIS.  “What is, IS”  What is Islamic State.

That was his answer to getting impeached.  He called upon ISIS to help distract America with acts of terror.  Isn’t it a bit suspicious that 9/11 happened just after George W. Bush getting into office?  That was just the Democrats showing what happens when you try to impeach one of them.  They will unleash their terrorist buddies on us.

Obama knows he is facing impeachment and when he is out of office in 2016, war crimes.  So Obama is calling on the Clintons to use their terrorist connections to scare America!  They are trying to make us too scared to have Obama leave office and have three terms.

Just like FDR schemed to put Hitler into power and let the Japanese attack Pearl Harbor so he could stay in office for three terms and introduce ruinous Trotsky communism to America, Obama is scheming to put horrible enemies of America in power.  Even if we don’t let him stay in the White House, he will just anoint Hillary Clinton to be his successor and rig the vote so she wins.

And as we can see, ISIS, The Clintons and Barack Obama all have a left-wing conspiracy against America.