My dear friends, let your heart palpitate with terror, for Obama has stepped foot into the ancient Satanic grounds of Stonehenge.

In the days of old, great giants dwelled upon the Earth.  They were created by Egyptian scientists of old, the very same charlatans who performed their magic when Moses went to free the children of Israel.  In time, the secrets of these ‘scientsits’ passed to Europe, where they used Satan’s knowledge to create powerful weapons, to create genetic monstrosities and to even do magicks (much like the sinful magician Merlin).

In those days, Satan had perfect mastery of genetics and let these men know the secrets of life.  They created giants, the most famous of which is Goliath.  Other giants in the Stonehenge region built a giant, ancient monument to Satan.

We know of this Christianless time of Liberal Darkness as The Dark Ages.

The first age of Liberal Darkness occurred several thousand years ago.  Christians were forced to hide and the world suffered:  no new scientific discoveries, people died of the Black Death (EBOLA) and Satan reigned supreme.  Everyone wore gothy Marilyn Manson clothing and vampires lurked the street, searching for the blood of any remaining innocents.

It was not until a Christian Revolution in the early 1400s that Earth crawled out of its Dark Age Period, a time known as the Renaissance.  During this time, Christian Kings took charge and quickly killed off vampires with holy water and holy crosses.  The nights were again safe.  They fixed the world economy, chased Muslim terrorists back to their lands and made the world right again.

But alas, my friends, Satan is very patient and has an eternal life span.  The Bible warns that again he shall seek to establish a new Dark Age upon the world and what better person to lead a Dark Age than Obama.

Legend holds that when the chosen Knight of Darkness enters Stonehenge, a great power of the ancient magicians, Satanic priests and dark giants should fall upon him.  Here is the kicker my friends.  This picture was taken only moments after Obama walked into the center of Stonehenge.

The power of Satan falls upon Obama!

Now, weeks ago we warned that Obama was seen wielding ancient Norse hammers and controlling lightning.  I believe he is slowly traveliing the world, seeking out ancient relics so that he may increase his powers.  Perhaps we were right all along?  Could he be gaining the powers of the Antichrist?

Obama uses the power of mind control to cause a crowd of tourists to worship him beneath the Super Moon. 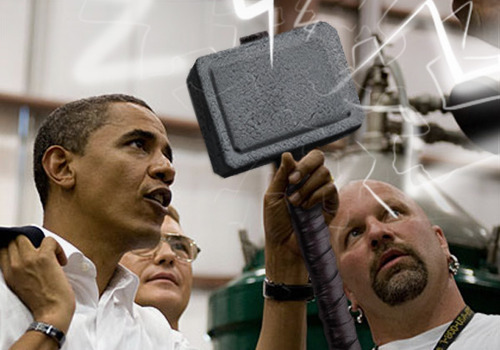 Obama shocks Norse bystanders as he casually lifts Mjolnir, a mighty weapon of the fallen angel and false god Thor, who now serves as a chief demon of Satan.

Obama displays the power of the Egyptian false god Ra, showing that he has the ability to create a mini-sun in his hands.

The signs are right in front of us.  Mark my words: we shall have plenty more examples of Obama gaining the powers of false, defeated gods of times past.  He will accumulate this power so that he may have power over Christians, try to destroy Jesus and wage war upon the moral so that he may try to establish a new Dark Age ruled by his Liberal Allies.

After gaining the power of Stonehenge, Obama calmly walked away and got back into his Marine One helicopter.  He told the crowd, “there’s another knocked off my bucket list”.