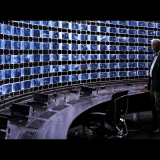 No data on Earth is safe from the prying eyes of Obama.  Today in defiance to international courts, Barack Obama announced he has a ‘natural right’ to look at the data of any ‘device’ that has ever connected to the Internet, including yours.  Obama stands in his new $83 billion taxpayer funded ‘command center’ at the NSA, where he regularly peaks at random iPhone iCloud servers, Android phones, Xbox one cameras, secret Facebook messages and pages and even home desktops of civilians around the world.

If you own a device that can connect to the Internet, Barack Obama claims he has a natural right to spy on you at any point in time.

The issue came to a head today after billion-dollar US company Microsoft refused to turn over emails stored in a server located in Dublin, Ireland.  Microsoft maintains that the US should have no jurisdiction over international servers.  Obama maintains that sense the Internet was created by the United States, the US Government has ultimate authority over any information transmitted over the Internet and the US president has a natural right as well.

Barack Obama is pressuring the court hearing the case to rule the Microsoft is in contempt of his orders.  If the court rules as such, it will set a precedent that any data stored by a company is subject to review by Barack Hussein Obama.

If you were to ask my opinion of all this, it is another sign of the end times that Obama plans to bring to American freedom.