King of Saudi Arabia: “ISIS Can Reach and Destroy America In Two Months”

King of Saudi Arabia: “ISIS Can Reach and Destroy America In Two Months” 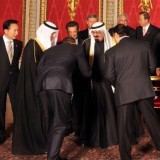 Obama can be seen bowing to the King of Saudi Arabia in this image.

ISIS can reach Europe in one month and America in two months, according to King Saud of Saudi Arabia.  The oil-rich monarch warned America that according to his sources and knowledge, ISIS has the capability to pull off a major attack in America that can be many times more disastrous than 9/11