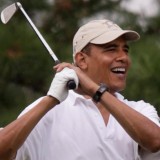 Take a good eyeful at Obama up above.  It must be nice to have a life so carefree that the day after Labor Day you can take another vacation day to go golfing with your Ivy League buddies.

It must also be nice to be able to go golfing as ISIS is killing Americans and thousands of American troops are being forced to go back to Iraq to reconquer lands that were already occupied Green Zones under the leadership of President Bush.

If you cannot tell, my written voice is dripping with sarcasm.  I find it absolutely appalling that Barack Obama could even golf at a time like this.  Right now, he should be fiery in his war room, staying awake until 4 am or even 5 am as he plots millions of different ways to torture every single terrorist on Earth!

President Bush would be on a plane to Iraq right now, salivating  for a taste of vengeance!  Oh my friends, Jesus would cheer “USA!  USA!’ from heaven as Dick Cheney and Donald Rumsfeld grimaced their faces and prepared the worst of tortures for those rotten terrorists.  President Bush be there in the plane cheering for our brave soldiers as they leaped into the desert, securing deserts, blowing up terror towns and tormenting any Iraqi who was not with us, but against us.

But Obama pulled all of our troops out of Iraq so he could spend more time golfing.  The terrorists took advantage and now we see what is happening.  We have to put a stop to the lazy Kenyan ruining this nation my friends.